From Yaser Games
Jump to navigationJump to search

So the idea is to trade abundant resources for standing, and then try to recruit colonist at a cost of 30 standings.

Another note, here are the details regarding childbirth source: 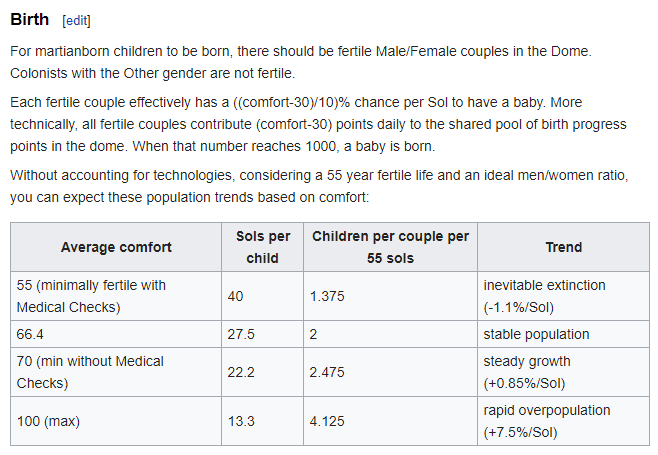 Going from previous game. 3 Solar, rush for Tower and Wind, Rush for 6 Towers, then rush for first dome. Will try to get a Basic Dome in starting location. Will cost 80 instead of 40 for a "half-dome", but only 20 for a full dome instead of 30 for a half dome, at the cost of 10 polymers and 5 extra energy maintenance.

A half dome is too small for what I have in mind, as I want to maximize comfort in order to increase child birth. That takes a lot of space to build the comfort building. The alternative is to have the commute between two half dome, and that would lower productivity.

Rushing to build manufacturing base, not research. So getting Engineers to man a Polymer Factory asap, so I can focus on only importing Machine Parts and Rovers. With the Polymer, I can build more Domes and several important Dome buildings.

Those buildings need to be staffed by 6 unskilled Colonists. The unskilled Colonists don't require the Diner for Dining, but require it it for Social needs. So we can have 6 unskilled and 6 Engineers per diner+park+Grocer setup. If we put in an extra Grocer, we increase that from 12 to 15 people, but would require 3 more to staff the extra Grocer. Moving out to work will cost 10 sanity, but sleep and Psychologist Commander solves that.

But most of the time, they won't all go to the smallest shop at the same time. We could go with a max of 75% of the 2/3 would go at the same time. 75% of 2/3 is 50%. That way, we get to have 6 unskilled and 10 Engineers (up from 6 Engineers) per diner+park+grocer+Apartments, but would require to each day take a look and see if anybody needs to move back to the Gateway Dome to buy more Art.

This setup would require one large slot for the park, another for the Apartments two 3 hexes for the Diner and Grocer.

What if we want to squeeze in a Machine Parts Factory prefab? I won't do the math for a Basic Dome with that factory now, but check how a Barrel Dome would handle that.

This leave two big slots available and 16 available Residential spaces in the apartments. That perfect, so we can fit in a third park, and another Grocer and Diner, and have room for a Nursery for the kids that will come, and a few open slots for small parks.

With a workforce of 30 Engineers, we can occupy 5 shifts.

Only problem is that the Barrel Dome costs 20 Polymer at a stage where I have a Polymer Factory and $10m cash, a lot of new Colonists to bring and a lot of things I want to build that require Polymers. So better to build the Micro Dome until we actually get 10 Engineers to fill it, and be on my way to getting more.

Another problem though. I have 0 Machine Parts, and a lot of buildings that will shortly require a lot of Machine Parts for Maintenance. I have to use the factory prefab I bought, and doing that in a Micro Dome isn't a good idea.

Just noticed that a building isn't actually open until the person gets there, not because you assign them to it. This can cause customer to face a closed shop.

Thing is, there are certain colonist that can remain satisfied, while others will have interests that are harder to satisfy. Keep each kind in a different dome in order to benefit from those easy to satisfy.

Them main problem with this setup is to carefully manage so there are actual couples. Without couples, the entire idea is moot, since Comfort over 70 only benefits reproduction.

In the begging, you can spend about 5 polymers to make people high in comfort, but there are too few Engineers to make couples. You will need an infirmary to couple them with with low Comfort mates. Later on, there will be a lot more poeple. but all polymer will be used for Domes and buildings.

After there is about 60 people to fully man the Polymer plant and one or two shifts at the Machine Part plant will you have enough Polymers to again spend on luxury, enough new people to spend it on and enough space to segregate them. By then, you are spending time outside the dome, on night shifts and on Heavy Workload, so you will need a competent infirmary anyway.

The third night shift is a heavy shift.

If they work outdoors, they get 30 sanity damage, and that is a huge hit without Composed reducing it to 15 or Workaholic reducing it to 20. They can heal 20 with sleep, psychology and a good medic.

Considering not making the night shift Heavy if you don't have enough with the correct traits and you aren't prepared to check on them and micromanage them every day.

The second shift is a also a Heavy shift.

The first shift should be a normal shift for recovering people. It can toggled between normal and heavy.

After the Middle Age, they turn into elders. You don't want them to die on Mars, as it removes to people from the pool. Put them in a separate Dome with nothing else in it and close to a Rocket launching pad so they get bored and earth-sick, leaving mars.

Terraforming looks nice. The rewards seem to be Open Farm, "Fully-grown plants are harvested for Food by Drones", so it can be equivalent to greatly increasing your colonist count. +50% cash from tourists is also a big plus.

It's Sol 19 and I have 120 Colonist after the ship with the last 20 arrived. With this, I got a Polymer factory working all shifts fully, and a Machine Parts working both day shifts. 16 Engineers total. 4 Elders.

So I need to start directing my research and future plans.

I have a great spot for research site, three of them giving 20+20+15=+55 Research. I need a Barrel Dome to get all three. Then I need to put Domes on Vistas to maximize Comfort. And finally, draw a cable to high altitute messa and expand it to have wind power farm on it.

So what are some of the research highlight to aim for?

Having more Colonist allows for a faster expansion rate, that can easily be translated into more research. Having them live longer allows for greater return on investment.

Larger domes are nice. Only thing that really has the potential of being game changing is the ability to have two spires. Does it? Well, not really. Nothing that can't be replicated with very careful planing and micromanagment.

The Martian Network is a first priority, the two wonders later priority.

This looks like top priority after having secured Electronics production. Get Universities, and the Institutes. After that, switch to Biotech to increase the population and have them age less. After that, get back to Social and remove their flaws and give them perks. With that quality workforce, go for Physics to get +45% research on top.

This things are actually really good. Without them, you will see 2 or even 3 Drones around a RC waiting for their turn to recharge, lowering productivity.

Day 30. I really enjoyed this run. Writing the wiki, I see I can redo it much better.