From Yaser Games
(Redirected from Civilization: Beyond Earth: Campaign: 2012-12-23)
Jump to navigationJump to search

The goal is to start near Titanium and have an early worker that improves it.

After that, the aim is to be effective in how you spend the artifacts.

Each artifact has a number of points that it directs towards each reward. If an artifact brings points towards a good reward, you don't want to accidentally spend it on a less prioritized reward.

In order to figure out what points each artifact has toward each reward, you need to gain a large number of them, and then test all combinations:

Note: When you have received a reward, you will no longer receive artifacts that has that reward as a main. So there is incentive to cash in rewards soon in order to avoid receiving those kinds of artifacts.

After having tested all combinations, we need to extract the frequencies each artifact shows up on each reward.

It's now time to analyze the information and make educated guess as to the hidden values.

We need to first doubtless information. For example: 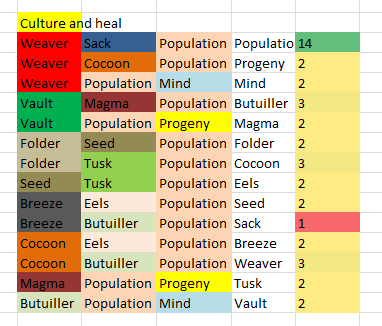 From the above data we can conclude with high certainty that the Population Estimation Computer artifact has points directed towards the Xenomass Bathhouse reward (+2 Culture, Units heal 100% after one turn in City), while NONE of the other 14 artifacts has even secondary points directed towards this reward. If they had, that artifact would be more prominent, but they all are equally low distributed.